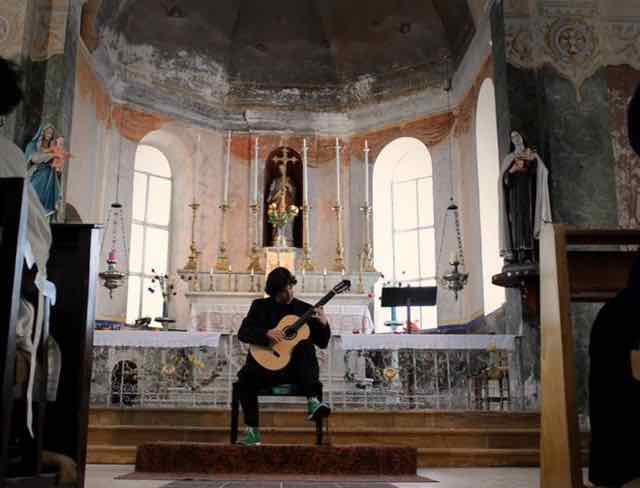 This is Yiannis Giagourtas, a Greek guitarist living in Holland. Last January he dropped by in the workshop and told me about   Acoustic, an exciting new project in which he takes part and for which this beautiful recording was made. 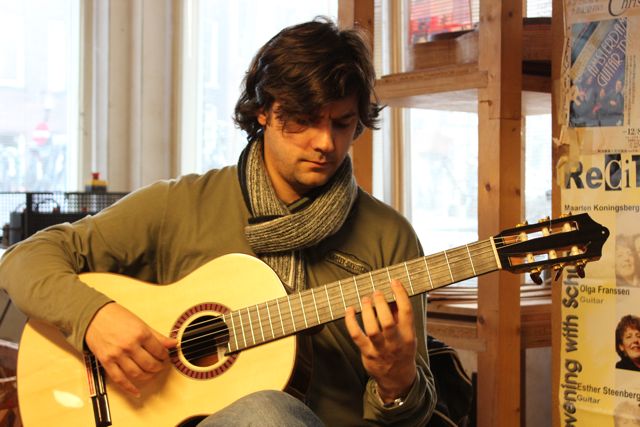 Yiannis Giagourtas came to the workshop to pick up his new guitar.

He is a very good player. Now studying with Zoran Dukic at the Koninklijk Conservatorium in den Haag.

Watch him or read more about him on Classical Guitar Review 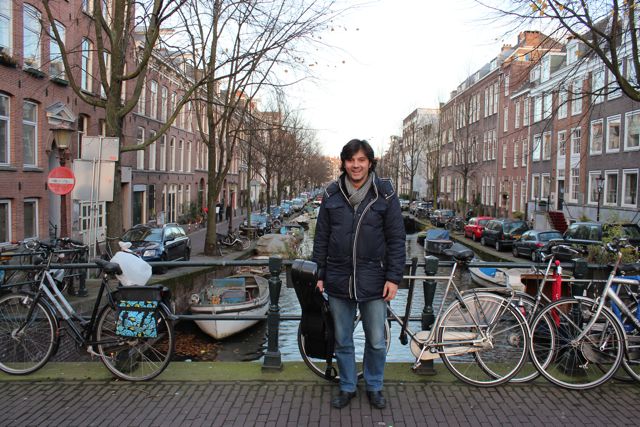 This is Guitar Echoes, the debut solo CD of Yiannis Giagourtas, a guitarist from Greece, whom I wrote about earlier.

For my debut album I chose to record works from a few of my favorite composers. This selection lit my passion for music, in particular for the classical guitar. I hope these pieces will touch your soul as they have touched mine!

In the video you can listen to a track of Guitar Echoes: Gnossiene nr. 1 by Erik Satie.
Guitar Echoes is for sale at CD Baby.

With a pile of wood, a saw, a chisel, a pot of glue and the book “Classical Guitar Construction” by Irving Sloane, Otto started making guitars in the attic of his house, using an old pool table as a workbench. This was in 1984.

After six months of perseverance and sleepless nights he managed to create something that was shaped like a guitar. Encouraged by the result he started on the next one. He had no teacher but showed his latest specimen to anyone who had anything to do with guitar playing. With their comments in mind, he began building his next one, and so on… This turned out to be a perfect method. In the years that followed Otto Vowinkel developed into a guitar maker with a great eye for detail.

In 1989 he met Dutch guitar maker Alex ‘Alejandro’ van der Horst (1959-2009) with whom he started working on a regular basis. They shared their ideas about ‘the ideal guitar‘ : a flexible tone, a quick response and the quality of the sound as the carrier of volume.

Nowadays Otto Vowinkel is a household name in the classical guitar world; a renowned luthier with a strong preference for traditionally built instruments and with customers all over the world.

Otto Vowinkel was born and raised by a family of tailors in the old centre of Amsterdam.
The unique rosette design features the motif found in the flag for the city of Amsterdam. The headstock is carved in the style of the facade of his workshop.

Others about Otto Vowinkel guitars

The vibrato is very clear and sounds very poetic in the high frets. The basses are very deep. The combination between the discants and the basses is wonderful. …The fingerboard is very comfortable like Rolls Royce!! Petko Genkov, Dubai

The guitars of Otto Vowinkel are actually the opposite of what I grew up with and have always believed in: large guitars with a cedar top, large scale, and hard work. It was around 1990 I guess, that I played on a “Vowinkel” for the first time. Right from the start I was delighted with the easyness of playing, the characteristic timbre, its response and the sense of the big “acceleration” of the sound.  I’ve played many guitars, but Otto Vowinkels’s guitars really suit me! Jacob Vlijm, the Netherlands

I have my beautiful guitar for 12 years. I’ve never played or heard it’s equal. Thanks so much. Frederick Boette Jr. , South Africa

Two days ago I gave my first performance with my new guitar. The guitar has started to develop a lot!!!  Week by week it becomes deeper and louder!!!  Yiannis Giagourtas, Greece