Wanting to add directing to his skills, offline editor Teun Rietveld asked if he could shoot some material of a guitar maker at work. in the old fashion way. Not on video, but analoge, on celluloid. Together with Gábor Deák on camera and Paul Damen as his camera assistent, he spent two pleasant days in my workshop. After the shooting it took a while before I heard from him. Last month he sent me a message. It had taken a little longer than planned. Below the nice result. 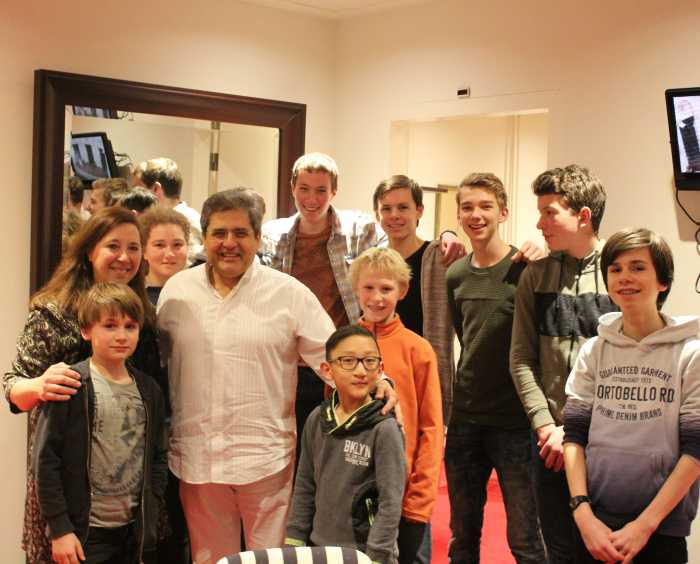 These are Susana Opanski, Costas Cotsiolis and students of Susana in the dressing room of Costas after his concert in our series Meesters op de Gitaar. Susana and her students are loyal visitors to the series.

Susana Opanski is convinced that music connects people and that playing an instrument plays an important role in the personal development of children and young people.

For more than 20 years Susana Opanski is working as a guitar teacher at the Music School in Amersfoort. Besides that she develops educational projects to bring children into contact with music. 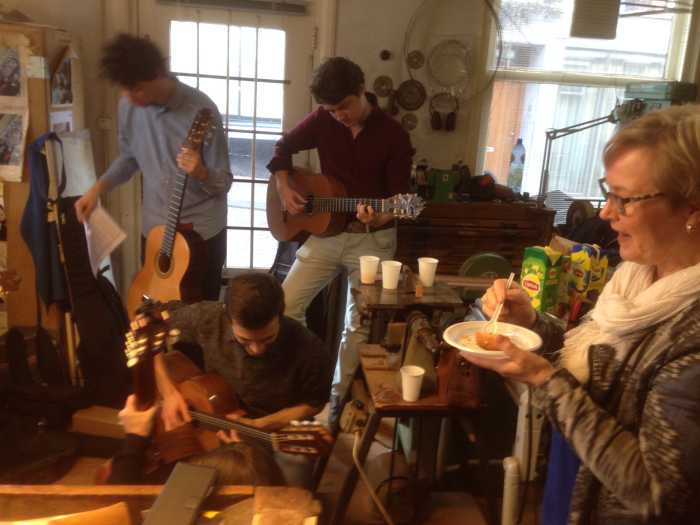 In addition to being a guitarist, bassoonist and guitar teacher, Susana Opanski is also the founding conductor a of the Student Gitaar Ensemble Nederland (SGEN). Last year the ensemble released a CD thanks to a successful crowdfunding campaign. Significant donors were rewarded with a visit to my workshop.

On May 25, the ensemble can be heard at the Vondelkerk in Amsterdam.
Our concert series continues in September. Subscriptions for sale. 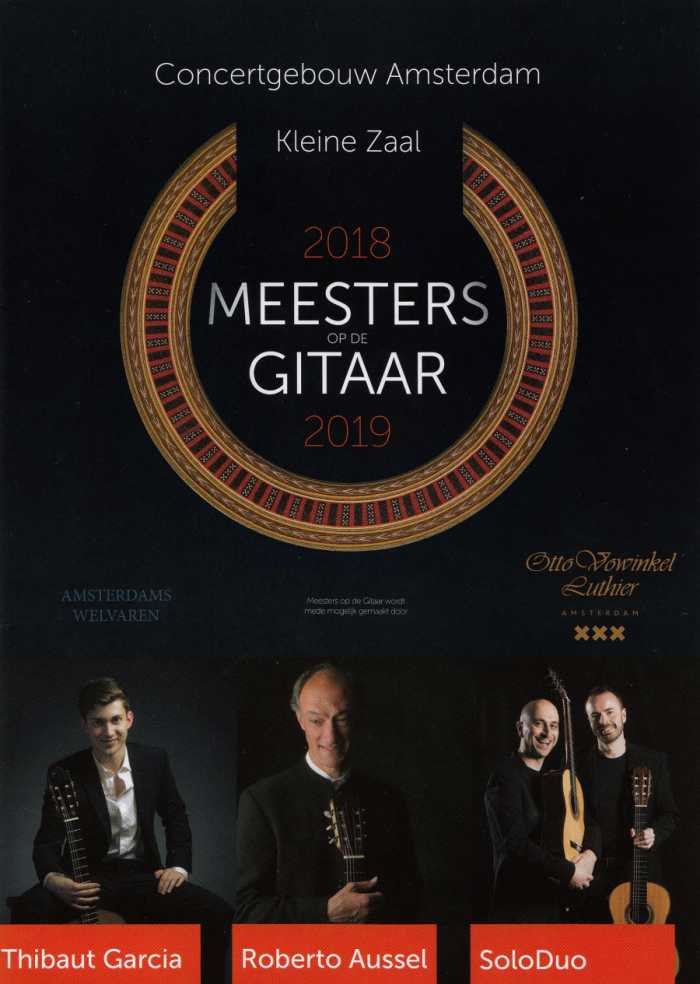 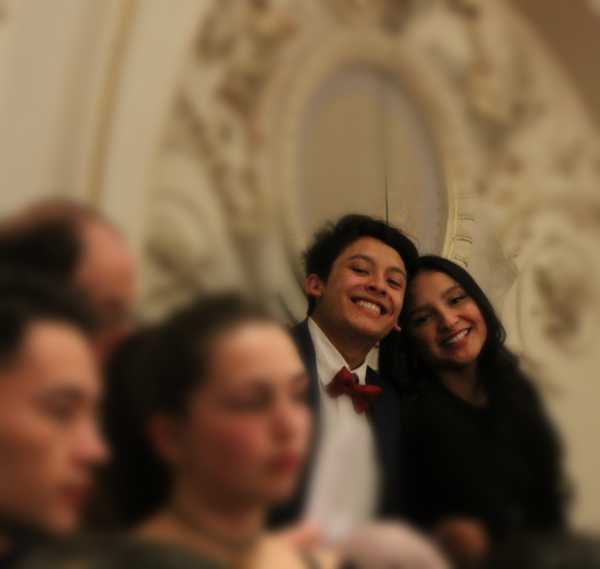 This is Kimiko Kawabata, a Japanese calligraphy artist, living in Leiden (the Netherlands) since 1972.

Inspired by haikus of master poet Basho describing the beauty of the area of Fukushima, Kimiko made a series of calligraphies for an exposition in Huis de Pinto in Amsterdam.

Next weekend, during the closure of the exposition a series of concerts will take place. One of the concerts will be given by Hambre y Sed the guitar ensemble of which Kimoko Kawabata is a member.

The revenues of the exposition and concerts will be handed to the victims of Fukushima by Kimiko personally. Since the region was destroyed by the earthquake, tsunami and nuclear disaster in 2011, Kimoko travels to Fukushima at least once a year, 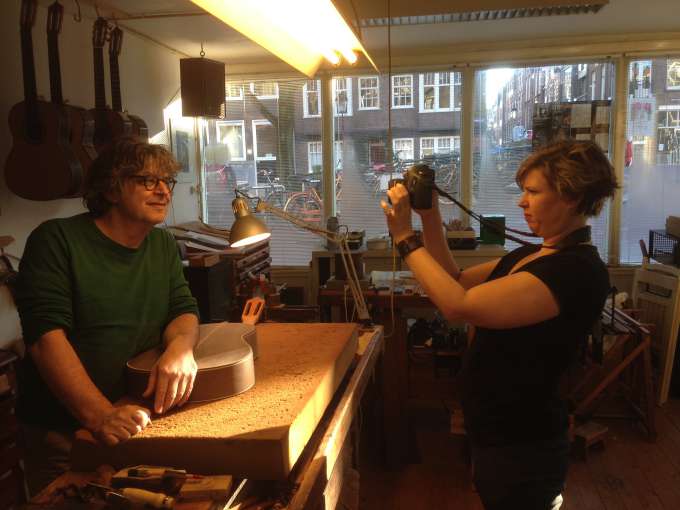 This is Tara Stewart taking a picture. Tara is flamenco aficionado, professional filmer and video editor. She shoots and edits all video’s for Guitar Salon International, my dealer in the USA.

A couple of weeks ago Tara came to Amsterdam for a holiday and brought her camera. She visited my workshop where I happened to be working on a new guitar for GSI! She took pictures and filmed and the beautiful result can be seen in GSI’s blog post Coming soon Otto Vowinkel. 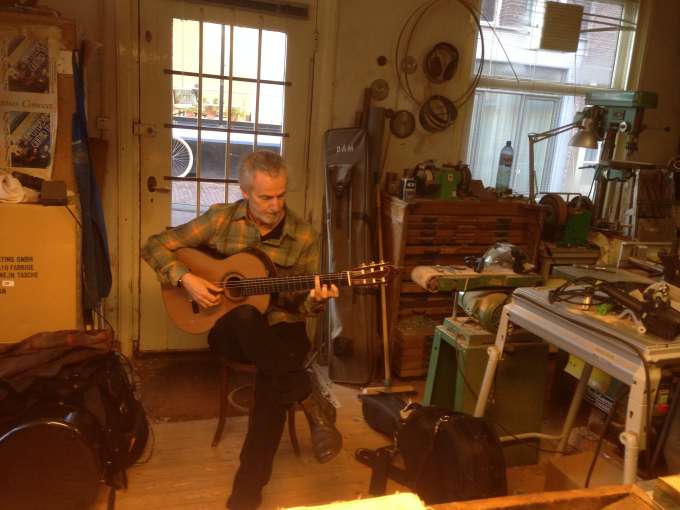 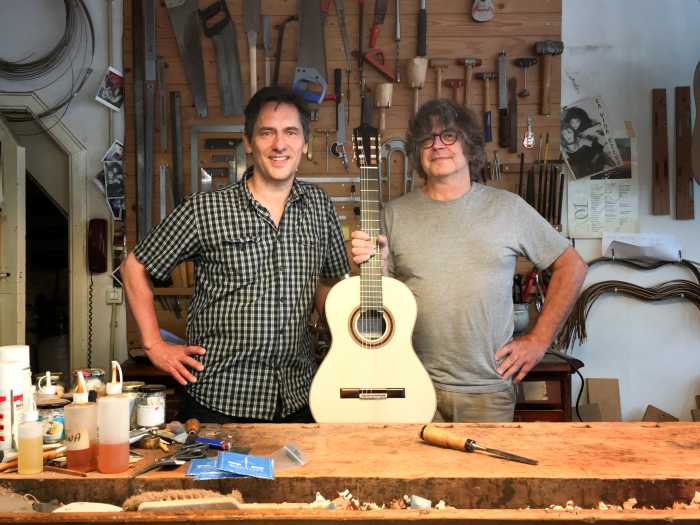 This is Thomas Vowinkel, an electric bass player from Germany who got interested in classical guitar playing. When he started looking for a new instrument he found out about a guitar maker in Amsterdam, named just like him!

Although my grandfather – named Otto Vowinkel too – comes from the same area as where Thomas Vowinkel comes from, it seems like that Thomas and I are not related family wise.

Thomas took some beautiful pictures of his stay in Amsterdam. The one on top he named The three Vowinkel’s. 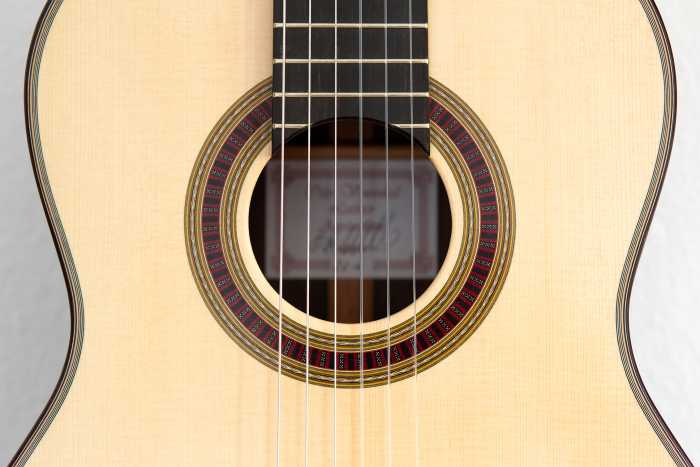 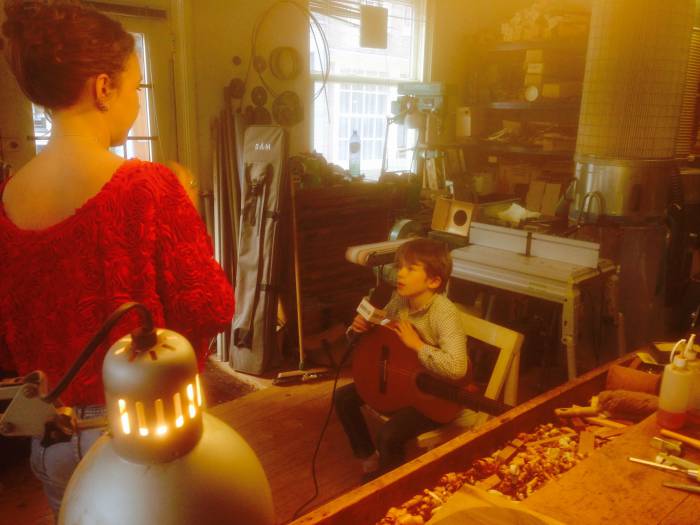 This is Tom. He came to the workshop to make this reportage about guitar making as a profession. The reportage was broadcasted on AT5, Amsterdam’s News Channel.

Tom likes playing the guitar and wanted to know how a guitar is being made. Since the reportage is part of a series about all kind of professions, I told him the best way to become a guitar maker is to just start making them.

I got this cartoon years ago as a ‘thank you’ gift for repairing the bridge of a bass. It’s in my office for years now and I share it with you in this post. I lost contact with the cartoonist. Even Google couldn’t help me finding him.

This is Ricardin Hwuang, a classical guitarist from South-Korea. Last December he made a trip through Europe including Amsterdam. While being so near, he visited the beautiful Zaanse Schans where, to his big surprise, he bumped into Aniello Desiderio .

He posted many pictures of his trip on Facebook account but this movie is not there yet. I made it in my workshop, the day he picked his new guitar. The ticking at the beginning comes from his wife’s photo camera.

This picture was taken by Marijn Scheeres. She liked the light in the workshop and asked if she could take a picture of it for Zaterdagochtend a weekly column in the Amsterdam newspaper Het Parool. It’s a popular column. I get many reactions. 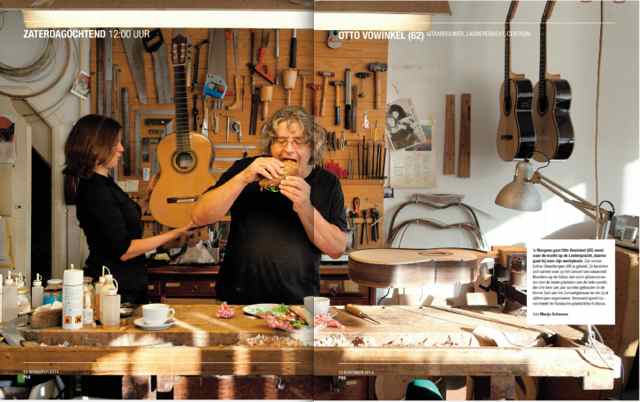