This is Emil Hadžiefendić, a young, gifted guitarist from Tuzla. Like most succesfull guitarists from Bosnia Herzegovina, he is a student of the well known teacher Predrag Stanković about whom I wrote earlier.

Predrag Stanković started a Guitar Summer School with the unpronounceable name PRST.  His former students Denis Azabagic and Sanel Redžić are also teaching at the PRST.

In the video below Emil is playing La Serenor, the first part of Collectici Intim by the Spanish composer Vicente Asencio. The video is an excerpt of a reportage about the festival by Ljetni Magazin. The reportage (in Serbo Croation) can be found here.

This Summer Emil took part in the Solo Guitar competition of the Transilvania Guitar Association and won the first prize! More information , again for the ones who read Serbo Croation can be found on Tuzlarije.

Like in many Eastern European countries, the music education system in Bosnia Herzegovina is very well organized. There are elementary and secondary music schools. The curriculum works with grades and there are a lot of competitions taking place. No wonder this country has many talented guitar players. For example Belmin Okanović. He started to play guitar at age of 8 in elementary music school under the tutelage of Nedim Tinjić and continued with prof. Predrag Stanković at the secondary music school. After Summer he will start in Vienna to continue his musical education with Alexander Swete. Belmin plays beautifully and already won several competitions. Last week he sent me an email including this picture.

I just want to inform you that I won the First prize on Vojvodina guitar fest!
I really enjoyed the Festival, and the guitar was excellent!

I am sure we will here a lot of Belmin in the future.

Just like last year I went to the Sarajevo International Guitar Festival organized by Dani Sehu. It was all very nice and interesting. Here are some pictures.

This is Tarik Residbegovic. He is a pupil of Predrag Stankovic and he came all the way from Bosnia to Amsterdam to pick up his guitar. His father who accompanied him wrote me an email:

The guitar has safely arrived at Bosnia and my son is absolutely satisfied with it. 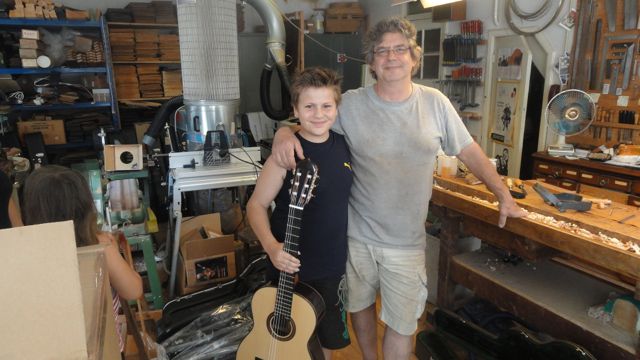 These are Thomas Offerman and Predrag Stankovic. The picture is taken at the Sarajevo International Guitar Festival for which I was invited by Đani Šehu, the founder of the festival. Thomas is professor in Rostock and also teaches in Berlin, he wrote a dissertation about guitar technique and works as a director of guitar ensembles. He is giving masterclasses at the festival. Predrag is a sought after guitar teacher who works at the music school in Tuzla. His (former) students won over fifty  international competitions. He is visiting the festival to see how the ones taking part in this competition are doing.